Karl Rove versus Sarah Palin…every comedic writer’s wet dream. And what makes this showdown even more delicious is that they are both right. I mean not about their ideological points of view. Oh, they’re definitely not right about anything of substance, not at all. But in terms of this feud — and more specifically the barbs they traded — they both landed solid, truthful blows on one another. Two titans of titanic stupidity locking horns, both of them the exact right poison their party needs to take in order to put themselves out of their misery once and for all.

Which means with our luck, they’ll both be ignored.

I’m not exactly sure when relations between Palin and Rove turned icy. Perhaps it was in 2008 when Rove like every other Republican watched Palin bumble and stumble her way through the most embarrassing campaign ever. Palin couldn’t name a single newspaper she read, insisted that just living in Alaska made her an expert in foreign relations, and appeared lost and confused in high-profile interviews. The Alaskan lightweight was most assuredly a big reason that John “When’s Roy Rogers Going To Record More Music?” McCain lost his bid for the presidency. Therefore it’s undoubtedly shocking that she’d be invited to CPAC — Conseravativealooza to you and me — this year. She’s kryptonite for them in the worst way, but they just can’t stay away from her.

The resigned governor delivered her speech to the conclave of conservatives on Saturday and took a dig at Rove. Well, I think you can’t really call it a dig, because Palin’s speech reads like a rambling, drunken, incoherent rah-rah speech you give your friends at the end of a heavy night of debauchery. I admit I didn’t watch the speech, but then I only have so much room in my brain for aimless political drivel that doesn’t even read like complete sentences.

To wit, here’s the shot Palin took at Rove. “If these experts who keep losing elections and keep getting rehired and getting millions — if they feel that strong [sic] about who gets to run in this party, then they should buck-up or stay in the truck. Buck up or run. The Architect can head on back to the great Lone Star State and put their name on some ballot –- though for their sakes [sic], I hope they give themselves a discount on their consulting services.” 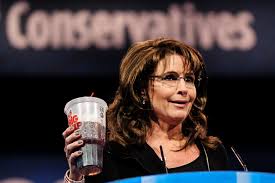 What the Queen of Republican Vapidity was getting at is Rove’s complete and utter failure in the 2012 election. He took in millions from campaign donors, promising a return to victory like what he’d delivered for Dubya and the gang. But instead what we were treated to was an election night meltdown that really should have given Karl pause. His insistence that Fox News hold out on calling Ohio — based presumably on some hunch he was feeling — really ought to be the nail in his political consultancy’s coffin.

“If these experts who keep losing elections and keep getting rehired and getting millions — if they feel that strong [sic] about who gets to run in this party, then they should buck-up or stay in the truck,” Palin told CPAC Saturday, referring to Rove. “Buck up or run. The Architect can head on back to the great Lone Star State and put their name on some ballot –- though for their sakes, I hope they give themselves a discount on their consulting services.”

So we have two human beings who really ought to know better making grand statements about the other being the bigger asshole. Meanwhile, the country thinks they’re both assholes and most people don’t care what either Sarah Palin or Karl Rove think about anything. I do have to give Rove credit for his retort though. Speaking on Fox News this Sunday, Rove responded to Palin’s advice that he try running for office instead of choosing candidates to run. Rove joked that being fat and bald he’s not an ideal candidate, but that if he ran and actually won an election, “would serve out my term and I wouldn’t leave office midterm.” That was a pretty decent jab at the fact that the one elected position that Palin has actually held she gave up less than half-way through.

What Rove and Palin’s clash demonstrates is that the GOP is in no position to recover from their tailspin of 2012. Both of them are nothing more than media whores at this point, trying to capitalize on former fame or success, though with Palin it’s fame without any real measurable success…other than being famous. In Rove’s case he’s a has-been who helped dismantle the Republican Party’s reputation for fiscal responsibility by helping secure eight years in office for the freely spending Bush Administration. The GOP’s survival depends on its ability to shun both Palin and Rove; neither represent a path forward for the party. But then again, not much that the Republicans have been doing would give anyone any indication that they even want to move forward.

Seeing the internal dysfunction within the Republican Party should give the rest of us our clearest insight yet into why President Obama has had such a hard time working with the House Republicans. They’re a party lost right now. The world is moving on without them. Marriage equality is a foregone conclusion, as at the very least removing marijuana from the list of drugs included in our insipid War on Drugs, and true single-payer health care isn’t that distant a dream either.  Whether the Boomers or their children  — the generation to which I belong — accomplish just these goals is the only real question. But regardless, these three unavoidable milestones are in America’s future, and what the GOP has to ask itself is just how far onto the wrong side of history do they want to be.