The Political Garbage Chute
Updated: May 2, 2013

I woke up this morning to a headline that I just couldn’t believe. The Universe was smiling down on me. I felt like I’d rolled out of bed right into a giant pot of gold at the end of a rainbow and Elvis Costello was there with me, singing “Welcome to the Working Week.” I was giddy and beside myself. If the rumors are true, life is going to be very, very awesome in 2015.  The headline in question? 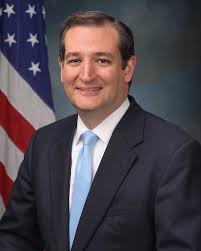 The National Review is reporting that the Senate’s newest and douchiest douche, Ted Cruz of Texas, is actually considering a 2016 presidential run. Anyone who’s watched even a microsecond of this pedantic asshole’s political theatrics knows he’s full of himself. He revels in attention, and he clearly gets off on being the most talked-about guy in the room, even if what’s being said is, “Fuck that guy!” Now though, we can see just how full of pride in his own smug face he is, because with barely a quarter of a year as a Senator under his belt, he’s eyeing a run at the Oval Office in 2016.

There are probably thousands if not millions of Americans who will be disgusted by the notion of Ted Cruz running for president. But I cannot wait to write hundreds and hundreds of jokes about this noodle in suit, this empty-headed clown who only wound-up in the Senate because he’s the reddest of red state morons in probably the reddest state (for now). Maybe you’re still not convinced, so here are 8 Reasons Why Ted Cruz NEEDS To Run for President in 2016.

#8.  Can Birthers Grasp The Concept of Irony (Or Spell It?)

Cruz was born in Canada, but his father was from Cuba and his mother was from the United States. By law, Cruz is most certainly an American thanks to his mother’s status. However, it’s not at all clear that he’d be considered a “natural-born” American citizen, which is what the Constitution requires of any potential president. How beautiful would it be to file a legitimate lawsuit seeking and injunction to stop Cruz’s inclusion on the ballot because he wasn’t born in the United States. In other words, I cannot wait to utter the phrase, “Where’s the long-form birth certificate, Senator Cruz?”

In both 2008 and 2012 we had candidates on the national stage that were the equivalent of a big ol’ double-bacon, quadruple patty cheeseburger with a side of gravy. Sarah Palin in 2008 and Michele Bachmann in 2012 represented the Tea Party perfectly. No clue about foreign policy, a sociopath’s cream dream of a domestic policy, and a massive dollop of bat shit crazy on top. By 2016 though, both Palin and Bachmann will be yesterday’s dumbasses, so a fresh dumbass will be needed. Enter: Ted Cruz.

#6. Hey, What’s the Worst That Could Happen By Electing a Right-Wing Ideologue from Texas?

If George W. Bush taught us anything, it’s that everything is bigger in Texas. Apparently that also applies to “lying about weapons of mass destruction,” “war mongering,” and “destroying our economy with idiotic tax breaks for the super rich.” Cruz could just be a continuation of our rich American tradition of electing right-wing morons from the Lonestar State.

#5. It’s the Quickest Way To End His Career in American Politics

Make no mistake, Cruz has no chance in Hell of winning. That’s not why we want him to run, obviously. We want him to run because nothing stops your upward trajectory quite like an embarrassing presidential campaign — and Teddy’s would most assuredly be that, embarrassing. It’s one thing to run a rhetoric-fueled Senate campaign playing to your most rabid of base voters, but it’s a wholly different thing running on a national stage. Under the harsh lights of reality, Cruz will look like the partisan hack extremist he is, and therefore even if he’s able to slink off and sit in his Senate seat for the rest of his life, his influence and power will be reduced to doing local radio shows for whatever right-wing media outlet will have him.

The fact of the matter is that the immigration population — you know; the group of people that Republicans have tried so hard for decades to alienate — they are helping to drive the Hispanic/Latino population numbers up, up, up in Texas. If Republicans think by then that they’ll have made that much an in-roads with the Latino voters, they’re crazy. You don’t reverse thirty or more years of animus with one bipartisan immigration bill. Not that he’d get it, but assuming Cruz took the nomination, he could conceivably lose Texas if the state’s party balance has tipped enough. And how great would it be to see a Texas Republican lose Texas?

#3. It’ll Be Another Tea Party Embarrassment

The Tea Party can’t win a big election, and everyone knows it. That’s because even within the Republican Party they are viewed as extreme obstructionists who have no real concept of how to govern. They are only interested in shrinking the size of government, no matter how much damage they do to millions and millions of people’s lives. Everyone not actually in The Tea Party can see right through them though, and by 2016 they’ll have had another couple years to impress on everyone just how unhealthy their political ideology is for growth and prosperity. Cruz will be chewed-up and discarded within a couple months of the primaries starting.

#2. It’ll Be Awesome Watching His Chickens Come Home To Roost

All Cruz has done since he’s come to Washington is to irritate everyone. Sure, he’s reveling in his role of agitator now, but how does he expect to to garner support from anyone who can help bridge the gap between far-right zealot and mainstream, moderate Republican? He’ll tell you right now in 2013 he doesn’t need to be a moderate, but as Mitt Romney found out in 2012, you can’t run for a couple years as an extremist and then stop and turn on a dime, not in the age of the Internet. Every idiotic and pedantic tirade Cruz makes, every stupid conspiracy theory he floats in the press and on the Senate floor or in committee hearings will become fodder for his opponents’ campaign ads. And don’t think his Republican rivals will be above hitting him with the extremist card either. It’ll be a glorious bloodbath.

#1. Watching Douchebags Fail and Flail Is The Best Part of American Politics

Okay, that’s not really true at all. The best thing about American politics is when it actually works. When we come together and get stuff done, that’s the awesome stuff right there. That being said, a good train wreck is always entertaining. Will Cruz tell everyone he can see Mexico from his backyard and therefore he’s an expert on foreign relations? Will he claim that being born in Canada exposed him to the evils of socialized medicine? Who knows? All we do know is that he will say some certifiably idiotic and untrue things, and we’ll be right there to cal him on it, every step of the way.

So from all of us here at The Political Garbage Chute: GOOD LUCK SENATOR TED CRUZ!