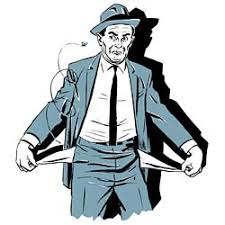 One of the most unsurprising complaints from the right about President Obama’s State of the Union speech was his bold challenge to Congress to raise the minimum wage. It didn’t very long for the right-wing media consortium to surmise that this was yet another anti-business move from the socialist Obama. Forget the fact that so many Americans can’t find a working wage. Forget the fact that so many American families have to have both parents (and many times a work-aged child) holding jobs to make ends meet. Apparently if we raise the minimum wage, it’ll just send American businesses into a tailspin, laying off employees that they can no longer afford to hold below the poverty line, like dunking someone’s head in a financial toilet and flushing it.

Or at least that’s what they’ll say. That’ll be the doom and gloom line they use to discourage any talk of raising the minimum wage. It’s like when they claimed in the nineties that raising taxes would cripple the economy. It didn’t. Or it’s like when all the gun zealots were afraid that Obama’s executive actions were going to include confiscation; they didn’t. But maybe I’m being too harsh on our Republican friends in Congress, because late last night I was emailed a list of talking points Republicans are now to use in their arguments against raising the minimum wage, and you know, they might just have a point!

#5. Hitler Raised the Minimum Wage Too!

Hey, if it works for the gun control argument, maybe the Hitler thing can work for every ideological point conservatives need to make. Who cares that Hitler actually did not disarm his people? The talking points don’t work if you get so picky about being historically accurate, do they? So why not apply the same level of ethical standards when talking about raising the minimum wage?

#4. Raising the Minimum Wage is a Gateway Social Policy

Look, if you give a mouse a cookie, it’s going to expect affordable health care. That’s the point here. Once you start treating people like actual human beings, when do you stop? Once you raise the minimum wage, what’s next? Free, top-notch preschool for all kids so they can hit the ground running in kindergarten, set off on a lifelong path of education?

He did what? Oh great, thanks Mao-Bama. Now you’re teaching our kids to be commies too!

#3. Raising the Minimum Wage Might Help Keep People Off Welfare and Other Social Assistance Programs

One big misnomer about people on welfare and other assistance programs is that they’re all lazy and out of work. The fact is that many social programs are for people who may have an income, but it puts them far below the poverty line, or puts them at a disadvantage and incapable of paying for health insurance for their children. Compare motor trade insurance costs with a family with young adults in the public school system, I’m sure that you will appreciate your situation a little more after that! Raising the minimum wage would help people afford the things in life they rely on assistance from others for. But on the other hand, people like John Schnatter, the CEO of Papa Johns –you know, the guy who said that thanks to Obamacare he was going to raise the prices on his shitty pizzas a few cents —  might not be able to charge so little for their pizzas if they’re not fucking over their employees. And God knows a millionaire’s profit margins are more important than a minimum wage worker’s quality of life. So moving right along…

#2. Raising the Minimum Wage Might Help Reduce Crime and Violence

If there’s anything economists know, it’s when people feel like they’re stuck in a shitty job with shitty pay, things never go bad. It’s not like the feeling of there not being a light at the end of the tunnel leads people to lash out, right? We don’t think that the places of high crime and violence are helped along by the lack of livable wages right? After all, what’s the point of demagogueing education if you’re not going to also keep the “Poors” working at sub-poverty rates too? It’s not good enough to rob them of their feeling of hope; you have to also make them feel sub-human as well. And what better way to feel hopeless and full of despair than when surrounded by violent crime? Take away welfare and other assistance programs on top of keeping their wages low, and just watch the Hunger Games break out!

Look, maybe they have feelings deep down in their hearts that we simply must protect job creators’ profit margins above all else. But doesn’t it just feel like when the president proposes things that might actually help dig people out of poverty, and the first thing the right cries about is hurting business owners, that they really don’t care about laborers at all? It’s because they think of themselves as job creators, or at least potential job creators. Because they’ve been sold on a lie that anyone, regardless of stature or place of birth, can become rich and powerful. The truth of course is that the system is supposed to work like that, but very honestly it’s not.

People like Senator Liz Warren excite me because she seems to get it. She rather boldly tells people all the time the system is rigged against the middle class. Because it is. And that’s exactly how the Republicans have wanted it for the last thirty or so years. Raising the minimum wage is a step in reversing that trend…so that, at the end of the day, is the only reason they oppose raising the minimum wage to something even remotely resembling a livable hourly rate.